This year it has rained at least once every week since spring started.  Most weeks it has been raining twice a week at a minimum.  Now summer is supposed to have taken over and it is still raining way too much. This is not only disconcerting for the beekeeper but it is very disconcerting for the bees.  Worse yet, we are starting to see the problems that this has caused and the errors of our ways.

As most beekeepers do, we purchased packaged bees and new equipment for replacing our dead outs and expanding our operation.  We hived the packages and began feeding sugar syrup and pollen patties.  Once the nectar flow was starting, or scheduled to start, we removed the feed from the hives and added honey supers. The rain kept coming every week.

When we checked on them the bees never seemed truly happy. And we noticed that the new packages queens had a poorer acceptance rate than we are used to seeing.  We gauge this on the number of queen cells produced by colonies started as packages.  Nearly all were building at least one queen cell.  Some had multiples.  This despite the fact they had a queen that was laying eggs and apparently operating normally.  Usually this behavior is only seen in a few new package colonies and usually if they do it at first, the behavior goes away as the season goes on and the nectar flow starts.  We made a few nice nucleus colonies with these cells, but after a while it becomes very disheartening to keep destroying large swarm and supercedure cells.

Then during our inspections, we started seeing problems with mites.  But the problems are much more advanced that we have seen before.  Normally at this time of the year we would only see one or two mites occasionally if at all, especially on a brand new hive, but this time we are seeing many more.  We can actually see mites on some of the bees in the new hives that were packages just a few weeks before.  If you can see the mites on bees, just imagine how many there are on the rest of the bees and how many there are living beneath the cappings.  We removed drone brood to find hordes of mites.  This was very alarming. 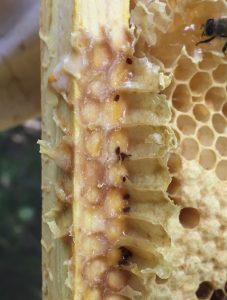 To prevent problems down the road we decided to be proactive and we reached for our weapon of choice, mite away quick strips or MAQS. We saw some mites drop, but not as much as we expected.  At this point we were hopeful that the mites in the cells had died.

The treatment seemed to exasperate the problems that we were seeing with queen acceptance and absconding.  Now where there were just a few cells we saw six. Where there were six we saw a dozen. We tried re-queening a few with new queens from our supplier, but the same thing happened all over again.  So we decided to let nature take its course.  Most of our new package hives swarmed because of all the cells that they kept producing. Others completely absconded by the end of the season.

After it was all over we realized that their lack of food caused by the inability to forage, the mite treatments, and our inability to realize that we needed to feed the bees during the time of stress, all contributed to the problems that we were having.  The problem ended in a honey crop failure for us.  Lots of rain did not produce lots of usable nectar for our little bee friends.  Hopefully the goldenrod flow will be good this fall. We will try to get some this year, despite the fact that we have not had good luck chasing this elusive honey before.