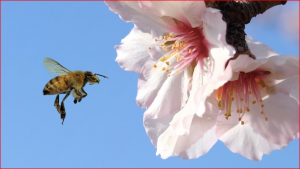 Many people think of bees simply as a summertime nuisance. But these small and hard-working insects actually make it possible for many of our favorite foods to reach your table. From apples to almonds to the pumpkin in our pumpkin pies, we have bees to thank.  Depending on an individual’s diet, between one and two thirds of the crops humans use for food production depend on pollination by insects such as bees in some way.  Also, the vast majority of wild plant species also require pollination to survive.

This valuable service that Mother Nature has provided at no cost for thousands of years, however, is increasingly failing. As an example, after 3000 years of sustainable agriculture, farmers in the Chinese province Sichuan have to pollinate apple flowers themselves by using pollination sticks because of the lack of honey bees to pollinate their crops.  These pollination sticks are commonly brushes made of chicken feathers and cigarette filters. This is one small example of a pollination problem occurring world-wide.

Closer to home, the California almond crop is critically at risk each year due to the lack of pollinators that are necessary to pollinate the thousands of blossoms that are on each tree.  To explain how large the problem is, the 2013 almond crop is approximately 800,000 acres, according to Extension apiculturist Eric Mussen of the UC Davis Department of Entomology.  The recommended number of hives or colonies to pollinate the almond crop is two per acre, which means that 1.6 million colonies are needed this year alone.  California only has about 500,000 colonies, so over a million need to be brought in from other parts of the United States.

Because of heavy honey bee colony losses sustained across the nation over the last few years, beekeepers that provide pollination services are not going to have enough colonies to pollinate the almond crop to full capacity this year.   And the almond crop is only one that is at risk. Many fruit and vegetable crops are at risk because of the lack of bees and other pollinator insects.

Bees are the most efficient pollinator.  It is true that birds, bats, beetles, various types of ants and flies, as well as butterflies can be classified as pollinators. The problem with these pollinators is that they are not designed for the job and do not do it as efficiently as the honey bee.  Bees are especially efficient at pollination because their goal in life is to collect pollen and nectar exclusively, as these become their food.  To accomplish this, bees visit many flowers of the same species during a single trip and have hairy bodies that easily pick up pollen grains.

How Much do Honey Bees Provide to Food Production?

In the United States, Honey Bees are required to ensure pollination and help guarantee the production of more than $15 billion crops each year.  If you enjoy eating Watermelon, Cantaloupe, Squash, Almonds, Apples, Cherries, Various citrus fruits, and various berry crops such as strawberries and blueberries, you have been enjoying the labor of honeybees.  Without bees to pollinate these crops, the blooms would not mature into fruit.  Bees provide crops such alfalfa, carrots, canola, and various clovers the ability to ensure that seeds are created to grow the next generation of plants.  Remember without the seeds it would be impossible to plant alfalfa or clover to feed to cattle, or grow carrots, peppers, cabbages, and various other vegetables in the garden.

Internationally, global food production worth over 200 billion dollars each year relies on the pollination services of honey bees and to a lesser extent other insects.  This means that as the honey bee and other pollinator’s populations decline, there will be a direct impact on the stability of food production and consumer prices.  It will also mean serious consequences for human health and the food supply. This means that an awful lot rests on the small honey bee.

If it were not for honey bees, food production would be very difficult and many of our favorite foods would not exist.  Remember to support your local beekeeper. They help to keep our food supply safe.